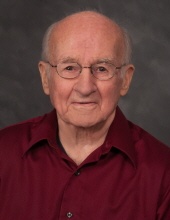 Lloyd I. Haldeman, 89, of Manheim went home to be with Jesus on Monday December 12, 2016 at Pleasant View Retirement Community. Born in Manheim, he was the son of the late Frank L. & Beatrice W. Haldeman. He was the loving husband of Susan J. Hollinger Haldeman and they would have celebrated their 67th Wedding Anniversary on January 1, 2017.
Lloyd helped his father, brothers, and brother-in-law start F.L. Haldeman & Sons, Inc. He retired in 1992 from the plumbing industry after a lifetime of service. He continued to travel with his tools and skills to help family and friends, as well as go on mission trips to WV, NM & KY.
Active as a faithful member of Grace Church, Lancaster, Lloyd served as Deacon, Trustee and Usher. He was also a life member of Mastersonville Fire Co. where he served as a Chaplain, Host, and Delegate to the Lanc. Co. Fireman's Assoc. Lloyd volunteered at the Nearly Nu Thrift Shop and the Manheim Historical Society where he was active with the Fasig House Committee. He also volunteered with Camp Conquest in Denver, Pa. His interests included his restored '46 Ford Coupe, from which he received many trophies at antique car shows, feeding and watching birds, and spending time with his family.
Surviving in addition to his wife are three children: Kathi, wife of Conrad Nasatka of Manhiem, Larry, husband of Debra Haldeman, of Manheim, Mark, husband of Karen Haldeman, of Landisville, Daughter-in-Law, Deborah Haldeman of Manheim, along with 14 grandchildren, 18 great grandchildren, and three siblings: Lois "Fern" Heisey of Lititz, Edgar, husband of Dorothy Haldeman of Manheim, and Eileen Miller of Murrells Inlet, SC.
He was preceded in death by two sons, Marlin and Dale Haldeman and a brother, Jay Haldeman.
Relatives and friends are respectfully invited to attend his Memorial Service at Pleasant View Retirement Community, Hoffer Auditorium, 544 N. Penryn Rd., Manheim on Sunday December 18, 2016 at 2:30 pm. Friends may visit with the family immediately following the service. Interment will be private and at the convenience of the family. In lieu of flowers, those desiring may send contributions in Lloyd's memory to Camp Conquest, 480 Forest Rd., Denver, Pa 17517.
To order memorial trees or send flowers to the family in memory of Lloyd I. Haldeman, please visit our flower store.