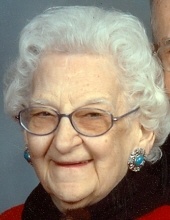 Lillian W. Wittle, 95, formerly of Mount Joy, died Tuesday May 5, 2015 at the Masonic Village of Elizabethtown, where she was a resident. She was the widow of the late Elmer K. Wittle who died in 2010. Born in Mount Joy (Florin), she was the daughter of the late Walter S. and Alice (Barnhart) Welfley. Lillian was a graduate of the former E. Donegal Twp. High School, class of 1939. Lillian was a licensed insurance agent for Maryland Casualty Insurance Co. for many years before retiring. After retiring she continued to work as a self-employed income tax preparer. She was a member of Glossbrenner United Methodist Church where she helped for many years as a money counter. Lillian’s favorite color was red and she enjoyed decorating and entertaining over the Christmas holidays. She enjoyed traveling with her husband prior to his passing. She was a member of O.E.S. Chapter 407 Elizabethtown.

Surviving is a niece Mindi wife of Thomas Marks of Mount Joy; a nephew Jack husband of Brenda Liggins of Elizabethtown; numerous nieces and nephews on the Wittle side of the family and several grand nieces and nephews. In addition to her husband and parents she was preceded in death by a sister, Mary E. Liggins.

Relatives and friends are respectfully invited to attend her funeral service at the Buch Funeral Home, 21 W. Main St. Mount Joy, on Tuesday May 12, 2015 at 10:30 AM. Interment will be at Chiques Brethren Cemetery, Rapho Twp. There will be a public viewing on Tuesday from 9:30 AM until the time of the service.

If desired, contributions in Lillian’s memory may be sent to Glossbrenner United Methodist Church, 713 Church St. Mount Joy PA 17552.
To order memorial trees or send flowers to the family in memory of Lillian W. Wittle, please visit our flower store.