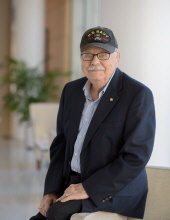 Lewis Fornoff, Jr., of Manheim, died Thursday, January 18, 2018 in his 90th year, at Hospice and Community Care, Mount Joy. Born June 26, 1928 in Ironville, to G. Lewis Fornoff and Mildred Edmonds Fornoff, he was an only child. He is survived by his wife Nancy (Ned) with whom he celebrated 45 years of marriage. He is survived by his children Stephanie Fornoff Kirkessner, married to Steve Kirkessner, Stuart Fornoff, married to Adrienne Graybill Fornoff, and son Jon Davenport, 5 grandchildren: Elise Miele married to Joseph Miele, Ian Kirkessner, Alex Fornoff, Hayley Fornoff and Jillian Fornoff, and great-granddaughter Grace Miele. He is also survived by former daughter-in-law Linda Fetter. He was preceded in death by wife Grace Hoover, mother of Stephanie and Stuart. He was a graduate of Manheim Central High School. Too young to join the Navy in World War II, he joined the Merchant Marine, under the auspices of the Coast Guard. He was sent on a ship that took Lancaster County horses to Trieste, Italy, because the Germans had killed all of the farm horses, so the Italians could not till the fields. After he came home, he joined the Navy at the end of World War II, and went to the South Pacific. Later he was on a hospital ship stationed in China, and because there were so many casualties on the hospital ship, he was able to live on the mainland. There he was able to support a Catholic orphanage for children left orphaned by the war in China. His next ship brought the first large group of WAVES home from the war.

He later returned to the South Pacific to participate in the first Atom Bomb test at Bikini Atoll, and piloted a boat of scientists from Princeton that went around the lagoon after the bombs were detonated. He received the China Cruise medal, the World War II medal, and the Asiatic Pacific Campaign medal.

After the war was over he used his GI bill to graduate from Thaddeus Stevens College of Technology in the printing program. After working at Wagaman Printing Company, he and a partner started Stiegel Printing in Manheim, from which he retired as President. After he sold Stiegel Printing, he served as a bailiff in the Courthouse and also worked for Napa in Manheim. He was a member of St. Paul’s United Church of Christ, Manheim, where he served on the consistory, and later was a member of Hope Episcopal Church, Manheim.

Lew belonged to Manheim Lodge 587 and was a 33rd Degree Mason. He was a Jaycee Senator. Lewis served on borough council for Manheim, and also served as Mayor of Manheim. He was President of Rotary, also President of the Lancaster Ski Club. Lew loved skiing with his children, and eating crabs with them. He was both Campaign Manager and Treasurer for U.S. congressman Edwin Eshleman’s campaigns. Following that he served on Congressman Bob Walker’s campaigns. He was a delegate to Ronald Reagan’s nominating convention and with his wife, they were honored to attend the inaugural ball at the Kennedy Center. Lew was honored to be asked to do a video for the Ann B. Barshinger Cancer Institute at Lancaster General Hospital to encourage people to be screened for lung cancer, especially former smokers, and it can still be seen online at the LGH website.

By the numbers: One boat on the Chesapeake, 3 Corvettes, 2 horses, many dogs. Lew and Ned loved to travel, both together and with their children. They visited 82 countries, went on two African safaris, sailed on 56 cruises, and saw 62 Broadway plays. They ate lots and lots of crabs with the family and they loved Las Vegas and the casinos. Their children and their dog Alice were the loves of their lives. It is fitting for his services to be at his daughter’s restaurant in Strasburg. 30 years ago his 60th birthday party was held at the Strasburg Railroad on the train, and in the picnic grove, with his many friends and family.
Thank you to all of the caregivers at Barshinger Institute, Pleasant View Care at Home and The Bob Fryer & Family Hospice Inpatient Center in Mount Joy. And, most of all to his two wonderful physicians Dr. Randall Oyer and Dr. Rosanne Oyer.

“No one in this whole world that we have traveled together, could have loved you more than I did, and I will forever and ever." Ned

Friends and family are invited to attend a memorial service to celebrate Lew’s life in the ballroom at Fireside Tavern, 1500 Historic Drive, Strasburg, on Sunday, February 11, 2018 at 1:00 PM. Friends may visit with the family at a luncheon immediately following the service. In lieu of flowers, contributions may be made in Lew’s memory to the Ann B. Barshinger Cancer Institute, 2102 Harrisburg Pike, Lancaster, PA 17601, or Hospice and Community Care, P. O. Box 4125, Lancaster, PA 17604-4125.
To order memorial trees or send flowers to the family in memory of Lewis Fornoff Jr., please visit our flower store.