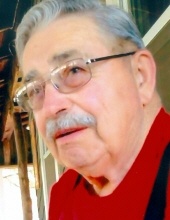 Kenneth B. Eberle, 83, of Manheim, died peacefully with his family by his side and went home to be with the Lord on Monday, December 1, 2014. Ken was the loving husband of Janet “Dolly” Rineer Eberle and they observed their 63rd wedding anniversary in June of 2014. He worked as a fleet mechanic for High Steel Structures in Lancaster for over 36 years. Ken served in the US Navy on the USS Philippine Aircraft Carrier. He was a member of Calvary Baptist Church of Lancaster where he served as an usher. Ken and his family were avid horseback trail riders. He was a member of the Valley Lea Riding Club in Drumore, and the OKOME Rod and Gun Club, Lycoming County. He enjoyed the outdoors, hunting, fishing, and camping. Ken had a life-long passion for his family and loved spending time with his wife, children, and grandchildren.

Relatives and friends are respectfully invited to attend Ken’s funeral service at Calvary Baptist Church, 530 Milton Road, Lancaster, on Friday, December 5, 2014 at 2:00 PM. There will be a viewing at the church on Friday afternoon 1:00 PM until the time of the service. Interment will be held at Millersville Mennonite Cemetery.