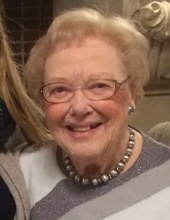 Kathleen L. Papp (nee Richards), age 96 of the Masonic Village at Elizabethtown, PA passed away on October 17, 2020. Born in Otley, England to the late John and Lucy Richards. She was a loving Mother, Grandmother, Great Grandmother and Great Great Grandmother. She was a war bride during WWII in England where she met and married the late Edward J. Papp, Sr. who died in 1978. They moved to the United States in the Philadelphia area. She lived over 50 years in Willow Grove, PA and later moved to Sea Isle City, NJ. where she lived for 23 years before her move to Elizabethtown, PA. While in Sea Isle City she was a member of the “she gulls” a volunteer ladies’ group that helped the police department and tourism commission with their various mailings to the community. Kathleen was an active member of the Sea Isle AARP organization. During her work career, she was a receptionist and telephone operator for many large and small companies in the Philadelphia area. But, her most treasured job was when she worked at the Sea Isle and Avalon Wawas as their coffee hostess where she worked until she was 85 years old.

A Memorial Mass and Celebration of Life will be on Saturday, October 24, 2020 at 11:00 AM at St. David Roman Catholic Church, 316 Easton Road, Willow Grove, PA. Friends may visit with the family at the church from 10:00 AM until the time of Mass.
To order memorial trees or send flowers to the family in memory of Kathleen L. "Nanny" Papp, please visit our flower store.