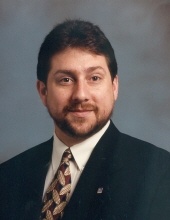 John Victor Knapp, 53, of Manheim passed away unexpectedly on Tuesday, April 5, 2016. Born in Lancaster, he was the son of William J. and Patricia Fridinger Knapp of Landisville. He was the loving husband of Donna M. Hoffman Knapp and they would have celebrated their 32nd wedding anniversary in June. John worked as a logistics coordinator at Wenger’s Feed Mill, Rheems. Prior to that, he worked as a Realtor for Coldwell Banker, Centerville, UPS driver in Lancaster and as a supervisor at several branches of the former Commonwealth Banks. A 1980 graduate of Hempfield High School, John also attended Millersville University. He was a member at the former Disciples United Community Church, Lancaster. His interests included fishing, boating and traveling to the family’s vacation home on the Eastern Shore of Virginia. John loved to spend time with his family and dog, Lily.

Surviving in addition to his wife and parents are four children, Kelli wife of Tyler Barto, Jonathan, Douglas and Michael Knapp all of Manheim, his precious granddaughter, Lydia Barto, two brothers, William M. Knapp of Lititz, Thomas A. Knapp of Lancaster and his mother-in-law, Carol Hoffman of Lewisberry.

Relatives and friends are respectfully invited to attend his funeral service at Wayside Presbyterian Church, 600 Stony Battery Road, Landisville on Monday, April 11, 2016 at 11:00 AM with Rev. Dr. Stephen P. Fritz officiating. There will be a public viewing from 10:00 AM until the time of service. Interment will be private and at the convenience of the family.

At the request of the family, please omit flowers. Those desiring may send contributions in John’s memory to the American Heart Association, 610 Community Way, Lancaster, PA 17603.
To order memorial trees or send flowers to the family in memory of John Victor Knapp, please visit our flower store.