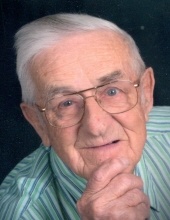 John I. Ebersole, 89, of Elizabethtown and formerly of Denver passed away peacefully to be with his Lord at his son and his wife's home on Wednesday, March 12, 2014. Born in Mount Joy Township, he was the son of the late Moses H. and Lizzie Longenecker Ebersole. He was the husband of the late Dorothy Weaver Ebersole who died in 2011 and his first wife, the late Mildred Hoffer Ebersole who died in 1998. In 1972, John started his business as a self-employed painter and worked hard for many years. After retirement he worked part time for the Manheim Auto Auction. He was an active and faithful member of United Zion Church, Elizabethtown where he served as a deacon for seventeen years, Sunday school teacher, treasurer and custodian. John loved to work and had a passion for gardening. He enjoyed making framed puzzles and sharing them with his children, grandchildren and great grandchildren.

Relatives and friends are respectfully invited to attend his funeral service at the United Zion Church, 401 East Park Street, Elizabethtown on Tuesday, March 18, 2014 at 10:30 AM. Interment in Elizabethtown Mennonite Cemetery. There will be a public viewing at the church on Monday evening from 7:00 PM – 9:00 PM and again at the church on Tuesday morning from 9:30 AM until the time of service. Please omit flowers. Those desiring may send contributions in John’s memory to United Zion Children’s Camping Program, 2298 Camp Road, Manheim, PA 17545.
To order memorial trees or send flowers to the family in memory of John I. Ebersole, please visit our flower store.