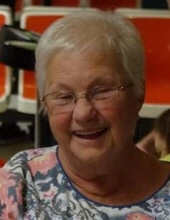 Joanne G. Martin, 73, of East Petersburg, died peacefully at her home on Monday, June 1, 2015. Born in Voganville, she was the daughter of the late Henry and Ruth Getz Wise, and the step daughter to the late Elsie Hornberger Wise. Joanne was the loving wife of Charles J. “Charlie” Martin and they would have observed their 57th wedding anniversary in August of this year. She attended Salem Bible Church, Voganville. Joanne and her husband were the owners and operators of the former Dutch Kountry Kitchen Restaurant, Manheim, and the East Petersburg Family Restaurant. In her early years she was employed by Horst Property Management and Weaver’s Egg Department both in New Holland. Joanne’s interests included: attending auctions, collecting peanut butter glasses, jelly glasses, cookie jars, working on jigsaw puzzles, crossword puzzles, taking trips to Florida; and playing cards with her family.

Relatives and friends are respectfully invited to attend her funeral service at the Buch Funeral Home, 21 Market Square, Manheim, on Friday, June 5, 2015 at 10:30 AM. There will be a viewing at the funeral home on Thursday evening from 6:30 PM to 8:00 PM with additional viewing on Friday morning from 9:30 AM until the time of the service. Interment will be in Voganville Union Cemetery, Earl Township.
To order memorial trees or send flowers to the family in memory of Joanne G. Martin, please visit our flower store.