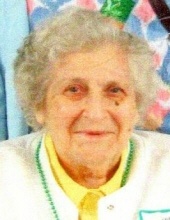 Joan V. Ruebman Prestegord, 86, of Lebanon, and formerly of Lititz, died peacefully on Wednesday, January 3, 2018 at Cornwall Manor. Born in Lititz, she was the daughter of the late Frederick and Evelyn Stark Ruebman. Joan was the wife of the late Selmer A. Prestegord who died in 2004; her first husband was the late Joseph Braungard who died in 1969. Following graduation from Lititz High School in 1949; Joan worked as a secretary for many years for Armstrong World Industries, Lancaster, she completed her secretarial career at the former Kerr Glass Company retiring in 1987. Joan was an active and faithful member of St. Paul Lutheran Church, Lititz, where she cared for the paraments, taught Sunday school and sang in the choir. Through the years she attended St. Peters Evangelical Lutheran Church, Lancaster, and recently was a member of Messiah Lutheran Church, Lebanon. Earlier in her life Joan was an active leader for Girl Scouts in the Lititz area. She was very creative and loved working with all types of ceramics.

Relatives and friends are respectfully invited to attend Joan’s funeral service at the Buch Funeral Home, 216 South Broad Street, Lititz, on Monday, January 8, 2018 at 11:00 AM. There will be a viewing at the funeral home on Monday morning from 10:00 AM until the time of the service. Interment will be in St. Peters Lutheran Cemetery. Contributions may be sent in Joan’s memory to the charity of one’s choice.
To order memorial trees or send flowers to the family in memory of Joan V. Prestegord, please visit our flower store.