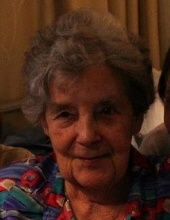 Joan S. Windsor, 87, formerly of Annapolis, MD, died Friday March 7, 2014 at the Masonic Health Care Center, Elizabethtown, PA. Born in Annapolis, she was the daughter of the late Joseph and Elizabeth (Farish) Sacrey. She was the widow of the late David R. Windsor who died in 1987. She was a graduate of Annapolis High School class of 1944. She was a former member of St. Luke’s Lutheran Church in Summerville, SC, and a member St. Peter Lutheran Church of Mechanicsburg, PA, and was active in its Red Hat Society. She was also a member of OES-ERME # 192 of Harrisburg, PA. Joan was fond of working on crafts and card games.

Surviving are two daughters, Robin wife of Gene Griffin, Surf City, NC and Wendy wife of Daniel Sweigert, Mechanicsburg, PA; four grandchildren, and one great-grandchild. In addition to her parents and husband she was preceded in death by a son David M. Windsor and a sister Nancy Avery.

Relatives and friends are respectfully invited to attend her funeral service at the Taylor Funeral Home, 147 Duke of Gloucester St, Annapolis, MD on Saturday, March 15, 2014 at 1:00 P.M. Interment will be in Cedar Bluff Cemetery. There will be a time of visitation with the family on Saturday at the funeral home from 12 noon until the time of the service. There will also be a Memorial Service at St. Peter Lutheran Church, 130 Nittany Dr., Mechanicsburg, PA on Saturday March 22, 2014 at 11:00 AM.

In lieu of flowers contributions in Joan’s memory may be sent to Masonic Charities, Office of Gift Planning, 1 Masonic Drive, Elizabethtown, PA 17022.

To order memorial trees or send flowers to the family in memory of Joan S. Windsor, please visit our flower store.