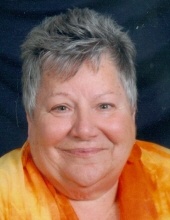 Joan, E. “Joni” Mellinger, 67, of Manheim passed away unexpectedly at home on Friday, February 27, 2015. Born in Ephrata, she was the daughter of the late John A. and Mary Myers Mellinger. Joni worked as a receptionist at Dr. Vincent Avallone’s Office, Lancaster. She was a member of Ruhl’s United Methodist Church, Manheim. For several years, Joni was involved with ORCA, Lancaster.

Relatives and friends are respectfully invited to attend her memorial service at Ruhl’s United Methodist Church, 4810 Elizabethtown Road, Manheim on Wednesday, March 11, 2015 at 11:30 AM. Interment will be private. Friends may visit with the family immediately following the service.