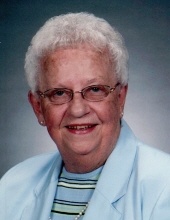 Jean Tyson Winters, 87, of Manheim, was called home to glory on Tuesday, March 24, 2020 with her loving husband by her side. Born in Manheim on January 15, 1933, Jean was the daughter of Abram and Cora Earhart, the youngest of 15 children. Always a Manheim Girl, she was a 1951 graduate of Manheim High School. She married another Manheim High School graduate, Mark Winters, Jr. on April 18, 1953.

Jean’s first job was at Keystone Bank (which later became Fulton Bank). She worked there until she had children. She very much enjoyed being a stay at home mom, but took a part-time job as a notary public at the Manheim Auto Auction for 25 years as she raised her family. Her final place of employment was working for both Joseph W. Fawber and Anthony A. Greiner Public Accounting Office in Manheim, where she worked as a bookkeeper until she retired.

A longtime member of Salem United Methodist Church in Manheim, Jean sang in the choir, serving as choir president for some time. She also sang in a women’s trio and helped with the children’s Sunday School program there. The last 15 years, Jean enjoyed being part of The Word of Life Class at Calvary Church. She also served in the nursery for Calvary’s Tuesday morning women’s Bible study as long as she was able.

Jean loved her role as grandmother and took much joy in cooking family meals and doing special things for her grandchildren. The grandchildren treasure their memories of birthday shopping trips followed by dinner with Grandma. Miniature golf outings with both grandparents were also special times. Many happy days were spent at the family cabin in Bedford County or on family vacations in Bethany Beach.

Due to the current public health guidelines, the graveside service for Jean will be private. A public memorial service will be announced at a later date. Interment will be in Hernley Mennonite Cemetery, Manheim. In lieu of flowers, those desiring may send contributions in Jean’s memory to Calvary Church Missions, 1051 Landis Valley Road, Lancaster, PA 17601. To send the family on-line condolences, please visit: www.BuchFuneral.com
To order memorial trees or send flowers to the family in memory of Jean T. Winters, please visit our flower store.