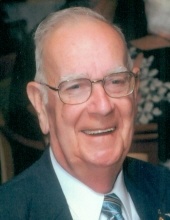 Henry Martin Wildasin, of the Masonic Village, Elizabethtown, PA, formerly of Dover, entered into eternal rest on Saturday, August 10, 2013 at Select Specialty Hospital, York, PA. He was the husband of Ann A. Wildasin with whom he shared over 56 wonderful years of marriage.

He was the son of the late Ralph and Madeline Little Wildasin. Surviving in addition to his beloved wife, include a daughter, Mrs. Lynda C. Watkins and husband Duane of York, PA, a granddaughter, Stacia M. Detter of Mount Joy, PA, and a grandson, Brandon R. Detter, USAF, and wife Megan and great-granddaughter Annie Joan Detter. He was preceded in death by a son, William H. Wildasin, and a sister Sallie S. Lebowitz.

Henry was a member of St. Paul’s united Methodist Church of Elizabethtown, PA. He formerly had been a long time member of Calvary United Methodist Church of York, PA where he served on various committees and councils. He was a graduate of West York High School, class of 1953, and of York College of Pennsylvania, class of 1980, with a B.S. in Business Management. Henry retired from the Commonwealth of Pennsylvania having been a public servant for over 30 years. He was also a retired Chief Master Sergeant from the U.S. Air Force, having served a total of 38 years active and reserve duty.

Henry’s masonic memberships include the White Rose Lodge No. 706, F&AM of York, The Valley of Harrisburg, Ancient and Accepted Scottish Rite, and the White Rose Scottish Rite Club. Military memberships include the Air Force Sergeants Association, Sampson Air Force Base Veterans Association, the 58th Fighter Association, and the York County Chapter 159 of the Korean War Veterans Association. After retirement, Henry and his wife enjoyed traveling. They toured all 50 states of this great nation several times, most of the Canadian Provinces, several locations in Mexico and Central America, and many of the Caribbean islands, also some touring of Ireland and England. Henry also made three trips to the Holy Land.

To order memorial trees or send flowers to the family in memory of Henry Martin Wildasin, please visit our flower store.