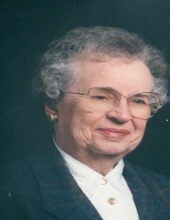 Helen D. Yuerhs, 93, of Lancaster, passed away on Saturday, May 10, 2014 at Lancashire Hall in Lititz, Pennsylvania. Born in Milwaukee, Wisconsin, she was the daughter of the late Louis and Helen Mueller Ledebuhr. She was the wife of the late Ormand C. Yuerhs who died in 1997. Helen retired as a Registered Nurse at St. Joseph Hospital, Syracuse, New York. She proudly served in the United States Air Force during WW II. Helen was a former member of Trinity Lutheran Church, Syracuse, New York and she enjoyed gardening and sewing.
Surviving are four daughters, Dr. Mary Y. wife of Dr. Lyle Munn of Porter, Indiana, Deborah J. wife of Butch Hunt of Sarasota, Florida, Margaret wife of Michael Poggioli of New Rochelle, New York, Catherine wife of Philip Richardson of Elizabethtown, a brother, Louis Ledebuhr of Milwaukee, Wisconsin, a sister, Dorothy Borst of Charlotte, North Carolina, thirteen grandchildren, and five great grandchildren. She was preceded in death by a son, Ormand C. Yuerhs, Jr.
Funeral service and interment will be private and at the convenience of the family.
To order memorial trees or send flowers to the family in memory of Helen D. Yuerhs, please visit our flower store.