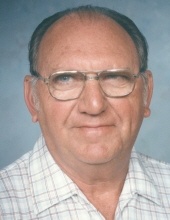 George H. “Chick” May, Sr., 85, of Manheim passed away on Wednesday, October 8, 2014 at Hospice & Community Care, Mount Joy due to injuries from a motor vehicle accident. Born in Manheim, he was the son of the late Charles and Lillian Knier May. He was the loving husband of Erma V. (May) May and they celebrated their 63rd wedding anniversary in June of this year. George retired after twenty eight years at the former Raymark Industries, Manheim. He proudly served in the United States Army during the Korean War. George was a member of the Manheim American Legion Post 419, Ham Radio Club, Lancaster and the Lancaster RC Club. His interests included fishing, woodworking and he loved to spend time with his family.
Surviving in addition to his wife is a son, George H. Jr. husband of Cathy Rettew May of Manheim, a daughter, Sandra J. wife of Eric Pennell of Lancaster, nine grandchildren and eight great grandchildren. He was preceded in death by a brother, Herbert May.
Funeral services will be held at a later date because of Erma May’s injuries sustained in the same motor vehicle accident. Please omit flowers. Those desiring may send contributions in George’s memory to Zion Evangelical Lutheran Church, 2 South Hazel Street, Manheim, PA 17545.
To order memorial trees or send flowers to the family in memory of George H. "Chick" May Sr., please visit our flower store.