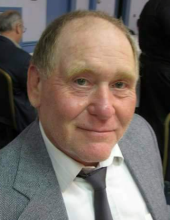 Garry A. “Pop Pop” Donaghy, 72, of Manheim and formerly of Edison, NJ passed away on Monday, October 9, 2017 at Lancaster General Hospital. Born in Bronx, NY, he was the son of the late James W. and Theresa Ewest Donaghy. He was the husband of Joan K. Dafcik Donaghy and they celebrated their 52nd wedding anniversary in December. Retired in 2010, Garry worked for the Middlesex County Parks. In his earlier years, he worked for First Boston Finance Co. He proudly served in the United States Army and Air Force during the Vietnam War. Garry was a member of the Edison Moose Lodge and he enjoyed woodworking, WWE Wrestling and Arizona Cardinals football.
Surviving in addition to his wife are two daughters, Karen (Kenneth) Leight of Edison, NJ, Katherine Donaghy of Manheim, two sons, Matthew and Jeffrey Donaghy both of Manheim, eight grandchildren, one great grandson, three sisters and two brothers.
Relatives and friends are respectfully invited to attend his funeral service at the Buch Funeral Home, 21 Market Square, Manheim on Monday, October 16, 2017 at 6:00 PM. There will be a public viewing from 5:00 PM until the time of service. Interment at Indiantown Gap National Cemetery, Annville on Tuesday morning at 11:00 AM.
To order memorial trees or send flowers to the family in memory of Garry A. Donaghy, please visit our flower store.