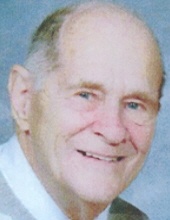 Frank David Hassinger, 85, of Mount Joy passed away peacefully at home on Friday, February 20, 2015 surrounded by his family. Born in Mount Joy, he was the son of the late Roscoe and Elizabeth Shatto Hassinger. He was the loving husband of Joan L. Knittle Hassinger and they celebrated their 63rd wedding anniversary in December. Frank and his son, Steven owned and operated Video Vision Theater and KIS 1-Hour Photo in Mount Joy. Previously, he was the owner of the former Hassinger Ceramic Mold Company, Mount Joy. Prior to that, Frank worked in the darkroom of the graphics department of AutoKraft Box Co, Mount Joy. Frank was a lifelong member of Mount Joy Church of God. During the Korean War, he proudly served in the United States Army, where he was stationed in Japan. He was also a member of the Mount Joy VFW Post 5752, Mount Joy American Legion Post 185. He was a Projectionist at the former Joy Theater. His interests included writing, comedy, traveling around the country, camping, and he had his private pilot license and enjoyed flying. Frank loved to spend time with his family, especially his grandchildren.
Surviving in addition to his wife are two children, Joni E. Waldron and Steven D. husband of Susan Hassinger both of Mount Joy, four grandchildren, Laura, Cynthia, Jennifer, Abigail and expecting a great granddaughter in June. He was preceded in death by a brother, Ralph Hassinger.
Relatives and friends are respectfully invited to attend his funeral service at Mount Joy Church of God, 30 East Main Street, Mount Joy on Tuesday, February 24, 2015 at 11:00 AM. Interment in Mount Joy Cemetery. There will be a public viewing at the Buch Funeral Home, 21 West Main Street, Mount Joy on Monday evening from 6:00 PM – 8:00 PM and again at the church on Tuesday morning from 10:00 AM until the time of service. Please omit flowers. Those desiring may send contributions in Frank’s memory to the United Service Organization (USO), 2111 Wilson Boulevard, Suite 1200, Arlington, Virginia 22201, www.uso.org/donate
To order memorial trees or send flowers to the family in memory of Frank D. Hassinger, please visit our flower store.