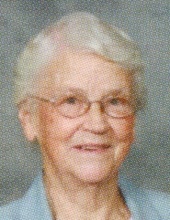 Esther W. Lehman, 88, of Manheim, went to her Heavenly Home on Saturday, April 5, 2014 at Hospice & Community Care, Mount Joy. Born in Rapho Township, she was the daughter of the late Walter and Daisy White Hosler. Esther was the loving wife of Wilbur G. Lehman and they would have celebrated their 70th wedding anniversary in June. A member of East Fairview Church of the Brethren, Manheim for more than 50 years, Esther served as a Trustee, Deaconess, taught Sunday School, sang in the choir, took part in the Sewing Circle and supported her husband with his ministry. She enjoyed gardening, sewing, and knitting. Esther had a servant’s heart, helping others by volunteering at Brethren Village and Pleasant View Retirement Community, and cooking and delivering for Meals on Wheels in the Manheim area. One of her favorite things was having the family all home for dinner.

Relatives and friends are respectfully invited to attend her memorial service at East Fairview Church of the Brethren, 1187 Fairview Road, Manheim on Sunday, April 13, 2014 at 3:00 PM. Interment will be private and at the convenience of the family in the adjoining church cemetery. Friends may visit with the family at the church on Sunday afternoon from 1:30 PM until the time of the service. Those desiring may send contributions in Esther’s memory to Hospice & Community Care, P.O. Box 4125, Lancaster, PA 17604-4125; Pleasant View Retirement Community Benevolent Care Endowment Fund, 544 North Penryn Road, Manheim, PA 17545; or Brethren Village Good Samaritan Fund, 3001 Lititz Pike, P.O. Box 5093, Lancaster, PA 17606.

To order memorial trees or send flowers to the family in memory of Esther W. Lehman, please visit our flower store.