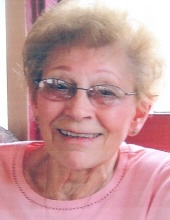 Esther M. Balmer, 89, formerly of Hossler Road, Manheim, died following a short illness on Monday, December 1, 2014 at Pleasant View Retirement Community, Manheim. Born in Rapho Township, she was the daughter of the late Phares and Annie Hoffer Ginder. Esther worked for 22 years at Pleasant View Retirement Community, Manheim; previously she was employed for 18 years at the former RCA Corporation, Lancaster. She was the loving wife of the late Emerson B. Balmer who died in April 1982. Esther was a 1944 graduate of Lititz High School, and a member of East Fairview Church of the Brethren, Manheim. She enjoyed working outside, reading, camping, hiking, going to the family cabins in Potter and Perry Counties, and going on bus trips, especially those led by Lloyd Ginder. Esther was an ardent fan of Elvis Presley and The Days of Our Lives soap opera, as well as the Manheim Central Barons football team. She had a life-long passion for her family, and enjoyed spending time with her children, grandchildren, and great grandchildren.

Relatives and friends are invited to a Life Celebration Service for Esther in Hoffer Auditorium at Pleasant View Retirement Community, 544 North Penryn Road, Manheim, on Sunday, December 7, 2014 at 4:00 PM. Friends may visit with the family in Hoffer Auditorium on Sunday afternoon from 3:30PM until the time of service. Interment will be private and at the convenience of the family in East Fairview Church of the Brethren Cemetery.