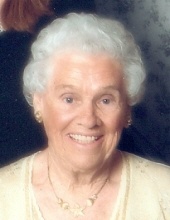 Esther D. Sauder, 93, of Brethren Village, Lancaster, and formerly of Manheim, passed away at the Lancaster General Hospital on Sunday, December 7, 2014. Born in East Lampeter Township, she was the daughter of the late Henry Z. and Estella Wenzel Diffenbach. Esther was the loving wife of the late Mervin S. Sauder who died in August of 2002. She was an active and faithful member of the East Fairview Church of the Brethren, Manheim; and served as a Sunday school teacher in her early years. Esther and her husband enjoyed spending time in Mount Gretna, and Sarasota, Florida, as well as traveling throughout many parts of the world. Esther was a host to many foreign exchange students and loved to extend hospitality to family and friends in her home. She was a member of Manheim Area Farm Women, and enjoyed crafts. Esther had a deep passion for flower gardening, and helped to create and expand the “Hidden Garden” at Brethren Village. She adored her family and surrounded herself with her children, grandchildren, and great grandchildren.

Relatives and friends are respectfully invited to attend Esther’s Service of Remembrance and Thanksgiving at the Brethren Village Chapel, 3001 Lititz Pike, Lancaster, on Saturday, December 13, 2014 at 11:00 AM. There will be no viewing. Friends may visit with the family following the service at Brethren Village. Interment will be private in East Fairview Church of the Brethren Cemetery.

Service of Remembrance and Thanksgiving