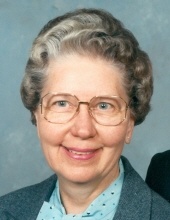 Eleanor G. DeFernelmont, 95, of Lititz, died peacefully on Thursday, November 10, 2016 at Luther Acres. Born in Fallsington, she was the daughter of the late Joseph and Edith Hibbs White. A homemaker, Eleanor was the loving wife of the late Leon DeFernelmont who died in August of 2004. For over 70 years Eleanor was an active and faithful member of First Presbyterian Church, Lancaster.

Surviving is a son, David W. husband of Idella Treadway DeFernelmont of East Earl, a daughter, Linda L. wife of Richard Strelnik of Florence, MT, three grandchildren and four great grandchildren. She was preceded in death and a brother and a sister.

Services will be private and at the convenience of the family.
To order memorial trees or send flowers to the family in memory of Eleanor G. DeFernelmont, please visit our flower store.