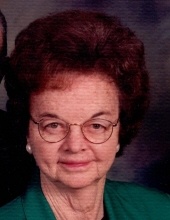 Edith L. (Messner) Hess, 93, of Lebanon, entered into Glory, Tuesday, June 14, 2022 at Cedar Haven Healthcare Center, Lebanon. She was the widow of Lester B. Hess who died in 2013. Born in East Earl, she was the daughter of the late Harry and Kathryn (Sharley) Messner. For most of her life Edith was a homemaker and was known as a gracious hostess. Edith was a regular attender at Lebanon Valley Bible Church, Lebanon. She enjoyed flowers and the outdoors.

Service and interment for Edith will be private and at the convenience of the family.
To order memorial trees or send flowers to the family in memory of Edith L. Hess, please visit our flower store.