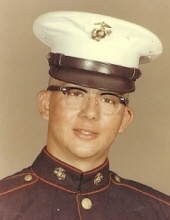 Douglas R. Pietsch, 71, of Mount Joy, died peacefully surrounded by his family, on March 10, 2016, at his residence. He was the husband of Carole (Caldwell) Pietsch, and would have celebrated 48 years of marriage on June 14th. Born in Lancaster, he was the son of the late Robert and Mary (Hagen) Pietsch. Doug had worked for Alcoa Products of Lancaster for 40 years before retiring in 2008. Doug proudly served his country in the U.S. Marine Corps during the Vietnam War. He enjoyed woodworking, fishing, riding motorcycles, networking on the computer. Doug was also an avid “Eagles” fan, and enjoyed traveling throughout the U.S. with his wife to see the many splendors of this country. But his greatest joy recently was spending time with his grandchildren.
Surviving in addition to his wife Carole are five children, Wendy Waite of Lancaster, Kimberly wife of Stephen McKain of Mount Joy, Laurie wife of Michael Connelly of Lancaster, Kevin Prescott and companion Jennifer Hargis of Mount Joy, Douglas Jr. husband of Jamie Pietsch of Maytown; six grandchildren Jason, Ryan, Stephanie, Justin, Allyson, Benjamin; five great-grandchildren; two brothers Edwin husband of Jan Pietsch of Lancaster, Robert husband of Janice Pietsch of Ashburn VA, and three sisters Margaret wife of Jim Supeck of Willow Street, Joyce Fleming of Lancaster, and Jan wife of Lou Kauffman of Strasburg.
Relatives and friends are respectfully invited to attend his memorial service at the Milton Grove United Methodist Church, 2026 Cloverleaf Road, Mount Joy, on Friday March 18, 2016 at 1:00 pm. There will be a time of visitation with the family following the service in the church fellowship hall. Interment in Conestoga Memorial Park, with military honors will be private. Please omit flowers, contributions in Doug’s memory may be sent to Compassionate Care Hospice, 1513 Cedar Cliff Dr., Suite 100, Camp Hill PA 17011.
To order memorial trees or send flowers to the family in memory of Douglas R. Pietsch, please visit our flower store.