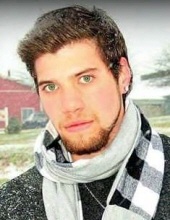 Beloved son and brother, Dominic R. Stitely, 21, of Manheim; and formerly of York, and Harrisonburg, VA, died on Saturday, July 4, 2015. Born in York, he was the son of Kathy Snell of Harrisonburg, VA. Dominic worked in the dairy operation for Steve and Brenda Hershey Farm, Manheim; he also was a skilled welder helping with projects on the farm. He was an active member of Newport Dove Church, Elm. Dominic’s interests included: fishing, hunting, motorcycle riding, camping, and hiking. He loved music and enjoyed playing the piano and guitar. Dominic’s unique personality was infectious; children of all ages were drawn to him. He had a passion for helping children any time he could.

Surviving in addition to his mother, are six brothers: Darwin Dunlap, Brandon Newcomer all of York, Joshua husband of Cassie Newcomer of Manheim, Adam Newcomer fiancé of Colleen Wright of Thomasville, Marcus Jones, Mykiya Jones, both of Harrisonburg, VA, six sisters: Mindy Einstein of Ashton, Ashlee Newcomer of Marietta, Sarah Newcomer of Harrisonburg, VA, Victoria Newcomer of York, Melissa Stitely of Red Lion and Samantha Leavell of Grottoes, VA Dominic will be lovingly missed by his girlfriend, Ashley Brown of Manheim. Preceding him in death is a brother, Nathan Newcomer.

Relatives and friends are respectfully invited to attend Dominic’s funeral service at Newport Dove Church, 656 West Newport Road, Elm, on Saturday, July 11, 2015 at 3:00 PM. Friends may visit with the family at the church on Saturday afternoon from 1:30 PM until the time of the service. Those desiring may send contributions to help defray funeral costs to the Buch Funeral Home, 21 Market Square, Manheim, PA 17545.
To order memorial trees or send flowers to the family in memory of Dominic R. Stitely, please visit our flower store.