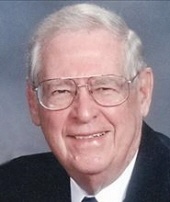 Charles W. Briggs, Jr., 86, of St. John's Herr Estate, Columbia and formerly of Manheim passed away on March 16, 2012 following a short illness. He was the son of the late C. Wilmer Briggs and Thelma S. Briggs. He was the husband of Charlotte Kessler Briggs with whom he celebrated their 65th anniversary on March 8. After graduating from Manheim Township High School, Charles served three and a half years in the U.S. Navy during World War II as an aerial reconnaissance photographer. Following his discharge he attended Kent State University and graduated with a B.S. in Business Administration. He later received an MBA from the University of New Haven. Charles retired from Raymark Industries after 31 years of service. He was controller at both the Manheim and Stratford, Connecticut plants. After his retirement from Raymark he joined Mission Aviation Fellowship (MAF) in Redlands, CA where he served as the Chief Financial Officer for 10 years. During that time he traveled extensively for the mission throughout Africa, Central and South America, and Asia. Charles earned his private pilot license at the age of 57. Upon retirement from MAF he and his wife moved to Pine Grove and later to Mount Joy and Columbia. During his 27 years in Manheim, Charles was active in many organizations including the Boy Scouts, Junior Achievement, The Jaycees, The Chamber of Commerce, and St. Paul's United Church of Christ. He later became a member of Gideons International and the Mount Joy Church of God where he taught Sunday school. In addition to his wife he is survived by a sister, Phyllis L., wife of the late Fred Wagner of Lancaster and six children: Kathryn A., wife of Dr. John Beres, Chapel Hill, NC; Bonnie S., wife of Tim Mateer, Mount Joy; Jessica M., wife of Stephen Sechriest, Quakertown, Melissa J., wife of James Steele, Cedar Park,TX; Andrew J. Briggs, husband of Janice R. Briggs, Bloomington, IN; Randall C. Briggs, husband of Cora C. Briggs, Carlisle. He is also survived by 22 grandchildren and 24 great grandchildren. Friends and family are respectfully invited to attend a memorial service for Charles at the Mount Joy Church of God, 30 E. Main St., Mount Joy on Monday, March 19, 2012 at 10:00 AM. The family will receive guests one hour prior to the service. A private interment will immediately follow the service. Please omit flowers. Contributions in Charles's memory can be made to Gideons International, P.O. Box 194, Manheim, PA 17545.
To order memorial trees or send flowers to the family in memory of Charles W. Briggs, Jr., please visit our flower store.