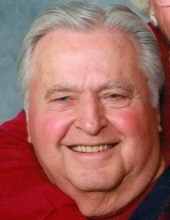 Carl S. Hoffer, 84, of Pleasant View Retirement Community, Manheim, and formerly of Mastersonville, died peacefully surrounded by his family, on Thursday, October 23, 2014 at the Lancaster General Hospital. Born in Rapho Township, he was the son of the late Phares and Irene Sipling Hoffer. Carl was the loving husband of Joyce E. Oberholtzer Hoffer and they observed their 62nd wedding anniversary in July of this year. For many years Carl worked as a superintendent of construction for T-A-H Construction Inc., Lancaster. He was an active and faithful member of the East Fairview Church of the Brethren, Manheim, and served on the property committee. Carl was a member of the Bald Eagle Hunting Camp located in Snyder County, the Manheim Masonic Lodge # 587 and the Lancaster Lodge of Perfection. His interests included: hunting, traveling, bowling, and following his favorite baseball team the Philadelphia Phillies. Carl and Joyce were loyal and passionate Manheim Central Barons Football Fans.

Relatives and friends are respectfully invited to attend Carl’s Celebration of Life Service at the East Fairview Church of the Brethren, 1187 Fairview Road, Manheim, on Saturday, November 1, 2014 at 10:30 AM. There will be a viewing at the church on Saturday morning from 9:00 AM until the time of the service. Interment will be in the adjoining church cemetery. In lieu of flowers contributions may be sent in Carl’s memory to East Fairview Church of the Brethren Memorial Fund, 1187 Fairview Road, Manheim, PA 17545, or Mastersonville Fire Company 2166 Meadow View Road, Manheim, PA 17545.
To order memorial trees or send flowers to the family in memory of Carl S. Hoffer, please visit our flower store.