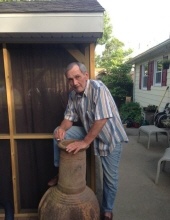 Calvin Leon “John” Stagner, 72, of Manheim passed away Wednesday, July 29, 2020 at the Lebanon VA Medical Center. Born in Charles Town, West Virginia he was the son of the late Irving and Lillian Sowers Stagner. John was the husband of Kathleen A. Gerhart and they celebrated 12 years of marriage in December 2019. John enjoyed fishing, lottery, delivering newspapers and was an all-around handy man. He worked as a carpenter before retiring. John proudly served in the U.S. Army during the Vietnam War.

Surviving in addition to his wife, Kathleen, is a son, Joshua Stagner of Tampa, FL, step son, Kenneth L. Gerhart Jr. of Mount Joy, two step daughters, Jennifer A. wife of Tony McSwain, Lori A. Cosgrove both of Manheim, two grandchildren, two step-grandchildren, a brother, Raymond “Woody” husband of Mary Stagner, Hagerstown, MD, and a sister, Deborah wife of Vito Wood of Italy. In addition to his parents he was preceded in death by a brother, Allen and a sister, Minnie.
To order memorial trees or send flowers to the family in memory of Calvin Leon "John" Stagner, please visit our flower store.