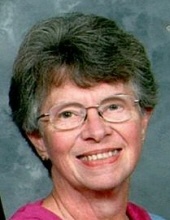 Ann J. Wells, 80, of Lancaster, passed into the arms of her Lord Jesus Christ on Sunday, October 10, 2021 at the Mennonite Home, Lancaster. Born on December 4, 1940 in Butler, she was the daughter of the late Stewart and Mabel Snodgrass Rubright. After high school Ann went to Sewickley Nursing School and became a Registered Nurse. Ann received her bachelor’s degree in education from Millersville University. She met and married James Earl Trimbath on October 7, 1961. Jim began working for Armstrong and they moved to Lancaster. They had a daughter and a son. Ann continued working as a nurse for Lancaster General Hospital. She then became a Nursing Instructor for the Career and Technology Center in Willow Street. Jim passed away in October 1976. On April 4th, 1980, Ann married Joseph F. Wells Jr. and they had 41 years together. Ann loved to play the piano and sing. She and Joe traveled to many places in the United States and also visited England, France, and Israel. Ann also taught Sunday School at several churches. She was a member of the Lancaster Church of the Nazarene and then attended Lancaster Evangelical Free Church in Lititz. Ann was also a former board member at the Arch Street Center. She enjoyed cooking and playing with her grandchildren.

Surviving in addition to her husband Joe; is her daughter, Kelly wife of Chris Long of Hummelstown, and her son, Jeff husband of Jill Trimbath of Lititz. She is also survived by seven grandchildren: Collin, Kaylor, Karina, and Cammie Long, and Sarah, Kate, and James Trimbath.

The family would like to thank the Staff at The Mennonite Home for their excellent compassionate care for Ann during her seven years as a resident.

Relatives and friends are respectfully invited to attend Ann’s funeral service at the Lancaster Evangelical Free Church, 419 Pierson Road, Lititz, on Monday, October 18, 2021 at 11:00 AM. There will be a viewing at the Buch Funeral Home, 21 Market Square, Manheim, on Sunday, October 17, 2021 from 6:00 PM to 7:30 PM; with additional viewing at the church on Monday morning from 10:00 AM until the time of the service. Interment will be in Witness Park. In lieu of flowers, memorial contributions may be sent in Anne’s memory to: Lancaster Evangelical Free Church, 419 Pierson Road, Lititz, PA 17543, or The Mennonite Home, 1520 Harrisburg Pike, Lancaster, PA 17601, or to a charity of your choice.
To order memorial trees or send flowers to the family in memory of Ann J. Wells, please visit our flower store.