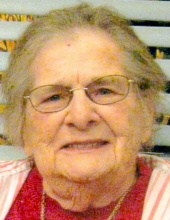 Alva Roberta Swope, 94, formerly of Mount Joy, died peacefully on Sunday, April 26, 2015 at St. Anne’s Retirement Community, Columbia where she was a resident. Born in Harrisburg, she was the daughter of the late Raymond and Ruth (Boyles) Toomey. She was the widow of the late Donald R. Swope who died in 2010. Alva had spent most of her working life in the sales department at the former Swope’s Furniture Store of Mount Joy. Alva enjoyed sewing and was proud to say she made her own clothes. Alva was a gifted storyteller, a wonderful cook, and a devoted Christian. She loved music, dogs and collected dolls.

Relatives and friends are respectfully invited to attend her memorial service in the Chapel at St. Anne’s Retirement Community, 3952 Columbia Ave., Columbia PA 17512 on Monday May 4, 2015 at 11:00 A.M. Interment will be at Indiantown Gap National Cemetery. In lieu of flowers, contributions in Alva’s memory may be sent St. Anne’s Retirement Community, Benevolent Fund, 3952 Columbia Ave., Columbia PA 17512.
To order memorial trees or send flowers to the family in memory of Alva Roberta Swope, please visit our flower store.